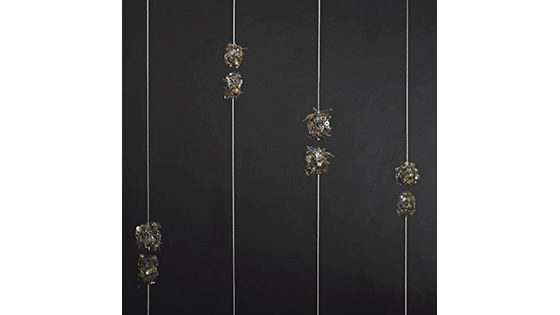 Two systems separated by a void: one dives from on high, the other emerges from the earth, going towards one another, without ever meeting. Controlled by an invincible mutual attraction, each one is looking for the other, but cannot find it, in a common effort to bridge a distance that keeps them apart.

This work evokes the difficulty of meeting through the experience of a painful separation, an unceasing effort to meet, but in vain. An impossible object of desire still ardently coveted, the unhappy but visible union implicitly reveals an unseen connection, one of the strongest, through which the subjects develop the hope of an encounter.

“Without contraries there is no progression. Attraction and Repulsion, Reason and Energy, Love and Hate, are necessary to Human existence.” William Blake

Who are we? What is our past? What does the future hold for us?
It was with those questions in mind that, in 2010, Quentin Carnaille began his first series of works which was to occupy him until 2015. Focused on the notion of time, he frees the gears from their mechanical arrangement by giving them a new poetic esthetics thus inviting Man to emancipation. Both abstract and figurative, his works are intended as a singular creation, in terms of form and scope. This series, made entirely of pieces of clockwork and magnets, celebrates the idea of time. An unalterable time over which matter transforms itself. The constant presence of magnets gives his works an invisible force, a universal attraction.
Quentin Carnaille talks to us about the relativity of time. The time of Space with his “zero-gravity” and abstract sculptures, the time of Man with his figurative representations. All his sculptures are marked by a profound desire to produce original pieces and to reinterpret certain iconic works in the History of Art. With this series, he expresses an intimate rhythm, a personal vision and a universal questioning resolutely addressed to the future.
“Time only has meaning with the evolution of matter, which never ceases to change in form and organization. Man is an extraordinary catalyst of that transformation, a true agent of the metamorphosis of matter.”