Tag: The Measuring of Time 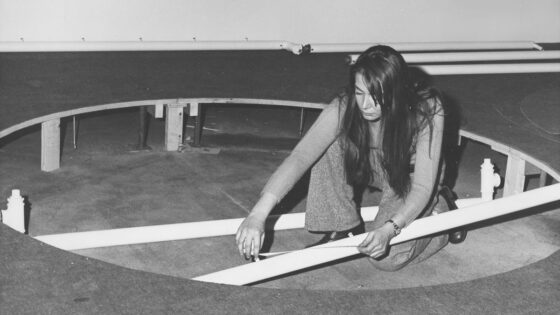 Laura Grisi – The Measuring of Time

The exhibition The Measuring of Time, conceived for Muzeum Susch, is the first, wide-reaching retrospective dedicated to the artist who died in 2017. The title of the show derives from a 16 mm film depicting the solitary artist on a sandy beach, amidst who is making a Sisyphean action that apparently has no end, beyond time. Over and above the display of important works from the 1960s through the 1980s and the presentation of documents that are fundamental to the artist’s research and travels, the exhibition will be the occasion for a reconstruction of several environments dedicated to natural phenomena (such as fog, rain, wind, etc.) that have not been on view since the turn of the 1960s and 1970s when they were presented by Laura Grisi.

Occupying a distinct position that is difficult to pinpoint within any single artistic trend of the 1960s-70s, Laura Grisi’s oeuvre now appears as one of the most original and personal cases of conceptual art and diagrammatic thought (both sensory and mental), in which reasoning is shown through icons and by means of visual representations.

In her diverse practice which could be subsumed as revolving around the topic of the ‘journey’ (be that with respect to remote locations she visited or the multiplicity of mediums used), Laura Grisi embodies the sort of stateless and nomadic female subject who defies the politics of identity, the notion of unambiguous representation as well as the unidirectionality of passing time.

Born in Rhodes, Greece, in 1939, educated in Paris and living between Rome and New York, Laura Grisi spent long periods of her life in Africa, South America and Polynesia. This involvement with cultures beyond those of the Western world would leave an indelible mark on her own practice increasingly focused on the search for a cosmic thought or the ‘science of the concrete’, as Levi-Strauss would have it. In the same way, despite choosing photography as the primary method of her research, she subsequently moved to ‘variable painting’ (with sliding panels and neon tubes), followed by dynamic, environmental installations in which she artificially reproduced natural phenomena, in order to ultimately arrive at a descriptive, verbal form and mathematical language as a conceptual tool, which she employed to explore the mechanisms of human perception and knowledge. Laura Grisi’s body of work is a titanic effort to account for the breadth, the multiplicity, the imperceptible nature, as well as the infinite proliferation, of all things possible, the starting point for which are the precise constraints, paradoxical gaps, linguistic and semiotic limitations, in accordance with an approach that is close to the Nouveau Roman, the Nouvelle Vague cinema, and the French Oulipo group.

The tension between the macro and micro scale, between data and the potentiality (the system and contingency, the universal and particular, the past and the future) is enacted each time with radical politics of attention: to the minimal, the marginal, to zero degrees, with four pebbles, the sound of water dripping, the color of mango leaves, the direction of the wind, the perceptive passage between sensations, the sounds made by the movement of ants on the ground. Such extreme attention is always the subject of a solitary anthropological ritual whose cultural coordinates elude us: counting grains of sand, measuring the strength of the wind, distilling sensory perceptions, re-photographing photographs, permuting things and objects, listening to the inaudible – as if the immeasurable was always the ultimate data of an unflagging measuring process, as if signs and languages would be an initial limit of the possible. “Her work – as Lucy Lippard wrote in 1979 – balances between choices and lack of choices. She chooses the usually permutational system and then takes what it gives her”.

Laura Grisi The Measuring of Time

in collaboration with Krzysztof Kosciuczuk