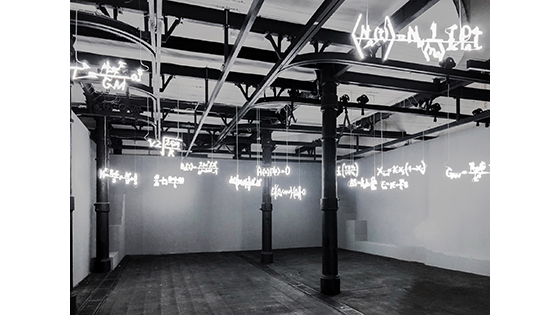 La sottigliezza delle cose elevate is an immersive interdisciplinary project by Andrea Galvani, designed especially for the monumental space of Pavilion 9B at the Mattatoio in Rome.

Constructed in 1888-1891 by the celebrated architect Gioacchino Ersoch, the Mattatoio is considered one of the most important industrial landmarks in Rome. From 2002-2018, it was the second seat of the MACRO Museum of Contemporary Art, first known as MACRO Future and then MACRO Testaccio, with an expansive exhibition space of 6,000 sqm stretching across two pavilions. Today, under the direction of Azienda Speciale Palaexpo, the Mattatoio juxtaposes its iconic historical structure with some of the most ambitious, foreword-thinking and experimental exhibitions in the international contemporary art world.

What happens when magnetic fields migrate? When time loses unity, direction, and objectivity? What would happen if space suddenly folded in on itself, inverting its structure?

The rigorous research of Andrea Galvani (Verona 1973, lives and work in New York and Mexico City) coalesces around history’s biggest questions—investigations nurtured by social, educational, political, ideological, technological, and scientific transformations that continue to change the conditions of our daily lives, inescapably and oftentimes invisibly. La sottigliezza delle cose elevate [The Subtleties of Elevated Things] is an interdisciplinary project conceived as an open laboratory, an experiential environment in constant and continuous evolution. Through a series of architectural installations, actions, and performance specifically developed for Pavilion 9B of the Mattatoio, Galvani focuses our attention on the human need to measure, decipher, and understand the unknown, to give shape and direction to the abstract.

The title of this exhibition is adapted from the grimoire Shams al-Ma’arif wa Lata’if al-‘Awarif (كتاب شمس المعارف ولطائف العوارف), The Book of the Sun of Gnosis and the Subtleties of Elevated Things, written by Ahmad ibn ‘Ali al-Buni (أحمد البوني‎) before his death in 1225 CE. Shams al-Ma’arif is generally understood as the most influential text of its kind in the Arab world, opening with a series of complex magic squares that demonstrate hidden relationships between numbers and geometrical forms. It was written at a time when science, mathematics, and magic were intricately intertwined. For over 10,000 years, humans have looked out on the visible and intelligible world, constructing our intellectual inheritance through observation, calculation, and analyses of phenomena often described with equal parts logic and mysticism. Many of the greatest minds in the history of Western science were part of this legacy: Galileo Galilei and Johannes Kepler were avid astrologists; Isaac Newton and Robert Boyle were alchemists. In his groundbreaking Systema Naturae (first published 1735), Carl Linnaeus devoted a whole chapter to the taxonomic order of mythical creatures, like the hydra and the phoenix. For the great physician Paracelsus, mastering chemical as well as magical cures was crucial to understanding illness and wellness.

La sottigliezza delle cose elevate embodies this visionary, pioneering, transdisciplinary approach to scientific research and processes, while also embracing the emotional, spiritual, and metaphysical environment of the exhibition. In this show, the Mattatoio does not only contain an articulation and extension of scientific and mathematical languages that transform, expand, and illuminate architectural space, but also the physical, intellectual, and psychological effort behind the mathematical calculations that form the architecture of our collective knowledge.

Galvani’s La sottigliezza delle cose elevate [The Subtleties of Elevated Things] is conceived as an open laboratory, an experiential environment in constant and continuous evolution. The exhibition comes to life through a series of intensive on-site interventions and three-month performance that will gradually unfold over the entire duration of the show. Collaborating with the Departments of Physics, Mathematics, Neuroscience, Astrobiology, Molecular Medicine, Biochemical Science, and Electrical Engineering at the Sapienza University of Rome, as well as researchers at CERN and Virgo data analysis group, the artist brings the raw processes of scientific research, computation, and analysis to the center, exposing what is normally invisible to us. La sottigliezza delle cose elevate manifests Galvani’s ongoing commitment to honoring the power of human knowledge while simultaneously emphasizing its limits, circumscribing a perimeter of action that moves forward—able to appear and generate itself from its own impossibility.

La sottigliezza delle cose elevate by Andrea Galvani is the inaugural exhibition in Dispositivi sensibili [Sensitive Devices], a three-year program conceived by Angel Moya Garcia for Pavilion 9B of the Mattatoio, advancing projects by some of the most important international artists engaging performance in their work today. 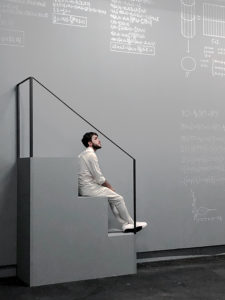 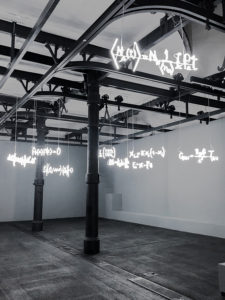 Andrea Galvani, Instruments for Inquiring into the Wind and the Shaking Earth, 2020 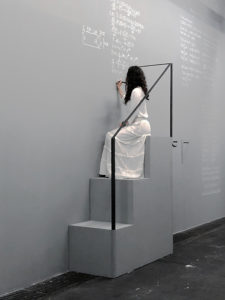 Andrea Galvani (b. 1973, Italy) lives and works between New York and Mexico City. He has exhibited internationally, including at the Whitney Museum, New York; the 4th Moscow Biennial for Contemporary Art; the Mediations Biennial, Poznań, Poland; 9th Biennial of Contemporary Art of Nicaragua; Art in General, New York; Aperture Foundation, New York; The Calder Foundation, New York; Pavilion – Center for Contemporary Art and Culture, Bucharest; Mart Museum of Modern and Contemporary Art, Trento; Macro Museum, Rome; GAMeC, Bergamo; De Brakke Grond, Amsterdam; Den Frie Centre of Contemporary Art, Copenhagen; Sculpture Center, New York; among others. His work is part of major public and private collections in Europe, the Americas, Asia, and Africa, including: the Permanent Collection at the Dallas Museum of Art, Texas; Deutsche Bank Collection, London; Artist Pension Trust, New York; the Contemporary Art Society, Aspen Collection, New York; the UniCredit Art Collection, Milan; the Permanent Collection of the United States Library of Congress, Prints and Photographs Division, Washington, DC; the Mart Museum of Modern and Contemporary Art of Trento and Rovereto; the 500 Capp Street Foundation, San Francisco; and MAXXI National Museum of XXI Century Arts, Rome. He was a visiting artist at New York University, and has completed several artist residencies in New York, including Location One International Artist Residency Program, the LMCC Lower Manhattan Cultural Council, and the MIA Artist Space Program/Columbia University School of the Arts. In 2011, he received the New York Exposure Prize and was nominated for the Deutsche Börse Photography Prize. In 2016, the Mart Museum of Modern and Contemporary Art of Trento and Rovereto presented Galvani’s first mid-career retrospective in Europe. In 2017, his work was selected to represent the Deutsche Bank Collection at Frieze New York. In 2019, he was awarded the prestigious Audemars Piguet Prize.

Open to the Public: 1-10pm
Opening Reception and Performance: 6pm-10pm