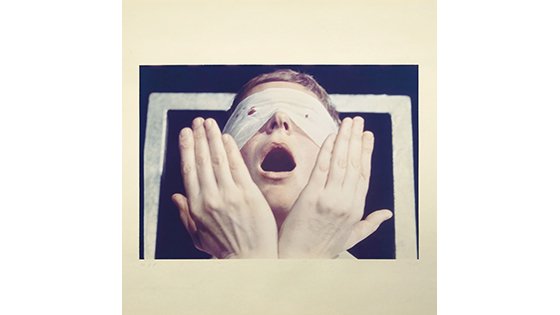 Gina Pane was born in 1939 in Biarritz, France and spent most of her life working between Milan and Paris, where she died in 1990. She trained at the École Beaux-Arts in Paris and was associated with Edmee Larnaudie’s Atelier d’Art Sacré [Studio for Sacred Arts] from 1961 and 1963. From the 1970s onwards, Pane became a defining figure of the international Body Art movement with her ‘actions’ – a series of highly choreographed events in which the artist subjected herself to intense physical and mental trials, exemplified by works such as Azione Sentimentale (1973), Action Psyché (1974) and The Conditioning (1973), during which she lay upon a metal bed frame suspended over burning candles. In the 1980s Pane stopped performing entirely, and in the 1990s she moved to sculpture and installation. Her final series Partitions(1980-89), inspired by the lives of martyrs, led her to re-examine the portrayal of the body throughout the history of the visual arts, specifically in relation to the mystical and religious iconography of the Renaissance. In 2007, Pane’s work was included in the ground-breaking exhibition ‘WACK! Art and the Feminist Revolution’ at MOCA, Los Angeles, USA, cementing her historic contribution as a leading feminist artist. The artist participated at ‘Documenta 6’ in Kassel in 1977 and has had solo exhibitions in major museums around the world. More recently, her work was featured in important exhibitions such as Gina Pane’, Museo de Arte Contemporáneo de Castilla y León, Leon, Spain (2016); ‘Gina Pane’ at MART | Museo di Arte Moderna e Contemporanea di Trento e Rovereto, Trento, Italy (2012); and ‘Gina Pane. Terre – artiste – ciel’, Centre Georges Pompidou, Paris, France (2005). Pane’s work is displayed in public collections including the Solomon R. Guggenheim Museum, the Museum of Modern Art, the Centre Georges Pompidou, and Musée d’Art Moderne de la Ville de Paris, amongst others.

Gina Pane: Action Psyché forms part of the gallery’s 12-month programme dedicated to supporting the work of female artists. Titled 100% Women, the programme aims to remedy the gender inequality that persists in the art world and encourage wider industry action through debate, dialogue and collaboration. 100% Women will pursue its mission through a combination of gallery exhibitions, art fair presentations, artist talks, a film and lecture series, external collaborations and digital exhibitions hosted on the gallery’s new online platform.