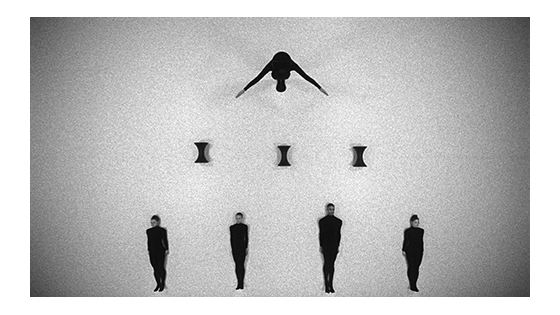 WIELS presents the first solo exhibition by Duncan Campbell (b. 1972) in Belgium. Irish-born, Glasgow-based Campbell is highly acclaimed for his revitalisation of documentary formats and experimental film. Campbell was recipient of the 2014 Turner Prize for his seminal film It for Others, originally commissionned by The Common Guild Glasgow and produced for the Scottish Pavillion at the Venice Biennial in 2013. His solo exhibition at WIELS comprises three of his major film works: It for Others (2013), Bernadette (2008), and o Joan, no… (2006). It for Others, the central work in this exhibition, has a double contextual appeal to a Belgian audience, first for its scrutiny of African sculpture in Alain Resnais and Chris Marker’s seminal film Les statues meurent aussi (Statues also Die, 1953) and for Michael Clark Company’s contemporary choreography. For this film, Campbell took Les statues meurent aussi as both source and artefact for his film to pursue a meditation on the life, death and the value of objects. Marker and Resnais’ film opens with the “When people die, they enter history. When statues die, they enter art. This botany of death is what we call culture.” So begins the film presented much like the objects that appear in the film: to be viewed in a time and place different from those of its making. Commissioned by Présence Africaine, it tracks objects from Sub-Saharan Africa to the Western metropolis, and the transition from religious fetish to commodity; from original to market reproduction.

The second work to be featured is Bernadette, a critically acclaimed film about the Irish Political Acitivist and Member of the British Parliament, Bernadette Devlin. This will be accompanied by archival documents from the People’s Democracy group of which Devlin was a member. The film installation is accompanied by a set of posters of the early stages of political in Northern Ireland, the “Troubles,” evoking also Devlin as a product of a political moment who was quick to grasp a bigger plot—the structural conflicts and tensions shared by all societies.

The third work, o Joan, no… is an abstract, cine-plasticist, sensorial film on vision and hearing. The presentation is completed with other printed works including a recent poem in tonalist associative modernist language. o Joan, no… begins in darkness; abstract darkness. As the film progresses the darkness is interrupted by light. A random sequence of lights ensues—theatre lights, streetlights, household lights, the lit end of a cigarette. The camera greets these interruptions in the darkness with alarm, reticence, perplexity, curiosity. The accompanying voice emits a series of grunts, moans, sighs, laughs.

Duncan Campbell makes films that look at representations of the people and events at the heart of very particular histories. The process of making the films becomes a means to further understand his subjects and reveal the complexity of how they have been previously represented. The diverse film traditions Campbell draws on for his works, not only show his profound erudition of the medium it’s traditions and roots in literature—but also challenge existing forms of narration. By mixing archive footage as well as new material, he questions and challenges the forms of narration, truth and fiction. In doing this Campbell questions how the narratives of history are being constructed and how they are shaped by opinion and also how language and images are sources for phantasy and mythology, opening up individual meaning inside the notion of standardised information.

Campbells most recent film The Welfare of Tomás Ó Hallissy, commissioned by IMMA with co-commissioners Van Abbemuseum, Eindhoven and Western Front, Vancouver, where it is consecutively shown. The film will be screened for the finissage of the exhibition at WIELS on March 26, 2007. Details to be announced.

Image: Duncan Campbell, It for Others, 2013. © the artist. Courtesy the artist, LUX and Rodeo Gallery, London.