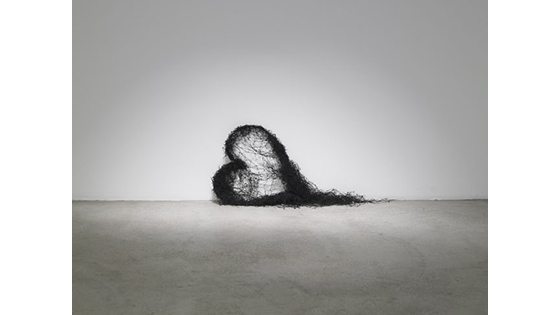 From February 10 to April 23, 2017  the French Academy in Rome – Villa Medici will host the first solo exhibition in Italy by Annette Messager, one of the most famous, innovative and non conformist French artists on the contemporary art scene.

Internationally speaking the exhibition is already looking like one of the big cultural events of the season. Titled Messaggera, the show combines the most remarkable works of a prestigious career with new ones specially created for the Villa. Taken together they testify to the eclecticism of an artist who makes nonchalant play with references both to art history and popular culture.

With Annette Messager, and at the instigation of director Muriel Mayette-Holtz, the French Academy in Rome – Villa Medici is initiating Une, its new series of contemporary art exhibitions, curated by Chiara Parisi: women artists internationally famed as contemporary icons will be presenting major shows with works for the most part not seen in Italy before. Each exposition will highlight the expressive force of the artist’s project and their vision.

Born in 1943 and laureate of the Golden Lion at the 2005 Venice Biennale, in 2016 Annette Messager received the prestigious Praemium Imperiale International Arts Award for sculpture. Not only sculpture, however, but also drawing, painting, photography, writing and embroidery, are the instruments she uses in her installations that are ironic reflections of her own experience.

“For me,” explains the artist, “transforming something is like playing. But playing seriously, the way children do. I consider myself an old child.” With these words she introduces us into a world founded on a balance between the familiar and the troubling, between dream and nightmare. A world of fabrics, colored pencils, doctored images, dolls, soft toys and stuffed animals.

At the Villa Medici Annette Messager offers an imaginative, dreamlike itinerary that sets up interaction between the interior and exterior spaces of the splendid Renaissance architecture. In an exploration of the revolts led by women, their fears and fantasies, the artist raises the issue of prejudice with a single intention: transforming taboos into totems. “When I started,” says Annette Messager, “the art world was almost exclusively male. Since then a lot more women have found their way in, but prejudices die hard. A woman artist triggers specific questions: I get asked about my private life, and if I have children. Women writers are more readily accepted, probably because they’ve inherited the tradition of keeping a diary.” With her highly personal way of interpreting our time, telling stories and creating disturbing ambiences, Messager challenges the social clichés about womanhood and plays her part in deconstructing stereotypes.

Published by Electa, the exhibition catalogue—the first in a new series on contemporary art—conceived as an artist’s book, is in fact Annette Messager’s personal diary devoted to the Villa Medici. It is accompanied by a poster specially created for the occasion.

Annette Messager’s show will be followed in May with exhibitions by Yoko Ono and Claire Tabouret, in October by a dialogue between Camille Claudel and Elizabeth Peyton, and in early 2018 by a solo exhibition by Tatiana Trouvé.

These series of exhibitions at the French Academy in Rome – Villa Medici will be accompanied by a publication curated by Maurizio Cattelan, Marta Papini and Chiara Parisi: a guide into the themes and content of the new program.