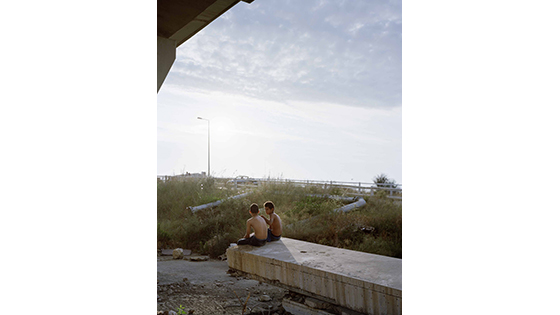 George Awde’s first solo exhibition in Kuwait, chronicles the transitory existence of a group of young men and boys – many of them migrant laborers, emigrants from Syria and Syrian Kurdistan living in the context of Beirut from 2007-2016. This exhibition considers the embodiment of becoming men, while also appreciating issues of mobility and nationality as we each etch out our place in this world.

Awde’s photographs question the relationship between citizenship, masculinity, and the sense of belonging to a place – as well as to one’s own body. The work explores the scars of the flesh with those of the soil. As these men grow and change, the photographs capture physical marks – in the form of tattoos and cuts – giving hints of struggle and survival. The shape, role, and uses of the body change as these boys age – filling out – becoming men. Parallel to changing borders of manhood are those of physical mobility which widen, contract, and close in terrains of the changing geopolitical climate.  The landscape allows us to consider our states of belonging, not just as a metonym, but a portrait of Beirut’s physical terrain in which these processes occur on/through/in the bodies of individuals.

Awde’s practice of using a large format camera, and the slow process it requires, contributes to the intimacy and guides the aesthetics of his photographs. This process mirrors the gradual approach he has of building trust and familiarity through a collaborative process of photography over a number of years.  Awde has a compulsion of returning; revisiting the same spaces, people, and obsessions time and again. From this emerges a passage, which creates a broken continuity – a process unfolding like that of aging, moving, or staying.

George Awde is currently an Assistant Professor of photography at Virginia Commonwealth University in Doha, Qatar and co-director of marra.tein, a residency and research initiative in Beirut. His awards include the Aaron Siskind Foundation’s Individual Photographer’s Fellowship (2012), Philadelphia Museum of Art’s photography Portfolio Competition (2012), Fulbright US Scholar Grant to Egypt (2012-2013), Alice Kimball English Travel Fellowship (2009), and The Richard Benson Scholarship for Excellence in Photography (2008). In 2015 Awde was an artist in residence at Light Work in Syracuse, New York.  Awde’s work has been exhibited internationally, including cities such as Los Angeles, Istanbul, Beirut, Paris, Doha, Dubai, Lahore, Cairo, London, and New York.