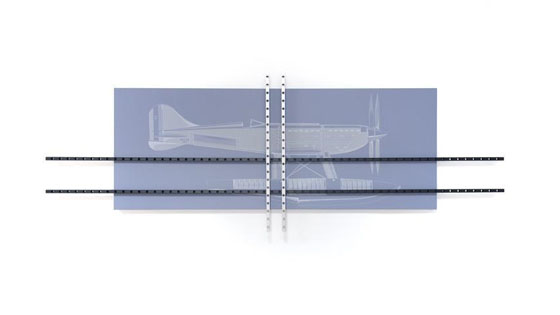 Fondazione Prada will present an anthological exhibition devoted to Gianni Piacentino (Turin, 1945), curated by Germano Celant.
The exhibit, hosted on the two levels of the Podium, comprises more than 100 artworks and retraces the career of the artist in anti-chronological order, starting from his most recent works from 2015 to those dating back to 1965.

Piacentino’s research has begun in an artistic and cultural background characterized by an increasing detachment from the subjective dimension which had animated Action Painting and Informalism, as well as by the development of a new visual language mixing the attention to pop and consumeristic imagery and the appreciation for both geometrical and primary forms.
The work of Piacentino did not embrace either of the dominant tendencies of those times – Pop art and Minimal art – but, according to the original reading of his work provided in this exhibition, operated an osmosis between the two. In order to research the ground where these two currents converge, Piacentino has turned to the world of velocity and transportation including cars, motorcycles and planes, all products of pop culture which, despite not belonging to the realm of pure art, are expressions of industrial aesthetics.

The artist approaches the aerodynamic fantasies of many Californian artists: from Billy Al Bengston to Craig Kauffman, from John Mc Cracken to John Goode. As Germano Celant explains: “This is the historic climate in which Piacentino’s contributions are rooted – between art and design, craftsmanship and manufacturing, the useful and the useless, singularity and seriality, the alterity and singularity of his work lie in the dialectic between these two polarities. Since 1965 his sculptures have achieved results transcending the functional object, even though, from tables to portals, it remains recognizable as a possible industrial entity featuring decorative elements, as derived by a background culture rich with applied sciences, artisan expertise, mechanical precision and engineering processes”. His first monochromatic objects, for instance, seem to belong to the research field of primary forms. They are in fact items such as tables and portals which are not functional to daily life, but instrumental in presenting a new visual and plastic configuration.

Through the presentation of his vehicles in the 1970’s and 1980’s, carrying cultural and aesthetic symbols, and the further production of decorated bars and canvases inspired by the world of aeronautics, from Combine Paintings to the metallic structures of the more recent Cantilevers, Piacentino has revealed his attraction to constructive disciplines entailing elegance and perfection as well as a preference for the absolute control of the physical and chromatic properties of materials. Throughout his career, the artist has led his own creative process following all the different phases implied in a given industrial production scheme, as happens in the realm of design. As Germano Celant states, his artistic path represents “an absolute escape from the imperfection, instantaneity and randomness of making art, in order to access a universe of perfection, calculation and concentration that can compete with a motor or flight vehicle, on both sublime and absolute levels”.