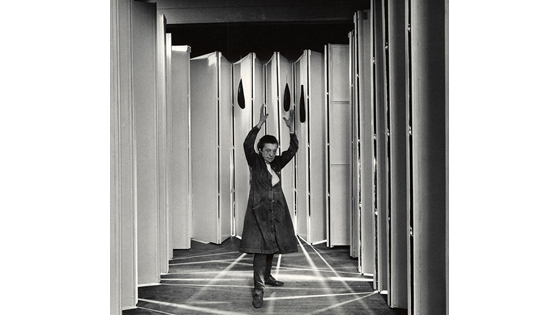 “Space does not exist; it is just a metaphor for the structure of our existence.” Louise Bourgeois

Louise Bourgeois (1911–2010) is one of the most influential artists of the twentieth century. Working with a wide range of materials and forms, she created a body of work that extended over seven decades.

Over her long career as an artist, Louise Bourgeois developed concepts and formal inventions that later became key positions in contemporary art; these included the use of environmental installation and theatrical formats, and the engagement with psychoanalytic and feminist themes. Both her distinctive sculptural forms and her outstanding drawings and graphic works are second to none. Among the most innovative and sophisticated sculptural works in her extensive oeuvre are the Cells, a series of architectural spaces that deal with a range of emotions. Created over a span of two decades, the Cells present individual microcosms; each is an enclosure that separates the internal from the external world. In these unique spaces, the artist arranged found objects, clothes, furniture, and sculptures to create emotionally charged, theatrical sets.

Including the five precursor works to the Cells that first emerged in 1986 with Articulated Lair, Louise Bourgeois created approximately 60 Cells over the course of her career. This exhibition is the largest overview of this body of work to date.

Louise Bourgeois’s Cells are intensely psychological microcosms: situated within various enclosures, each is a multi-faceted collection of objects and sculptural forms arranged to evoke an atmosphere of emotional resonance. In almost theatrical scenes, these everyday objects—items of clothing, fabric, or furniture—along with singular sculptures by Bourgeois, create a charged barrier between the interior world of the artist and the exterior world that is the exhibition space.

This exhibition, the first solely devoted to analyzing the Cells series, contains the largest number of Cells ever presented together. It also includes important works from previous decades that led to the development of the series. This comprehensive survey brings to light key aspects of Bourgeois’s thinking about space and memory, the body and architecture, and the conscious and the unconscious.

Louise Bourgeois: Structures of Existence; The Cells is organized by Haus der Kunst, Munich, in collaboration with the Guggenheim Museum Bilbao.