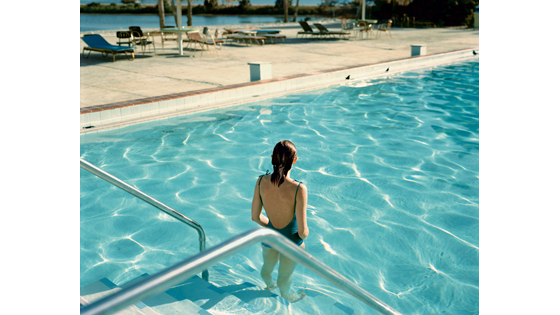 “I wanted to make pictures that felt natural, that felt like seeing, that didn’t feel like taking something in the world and making a piece of art out of it.” Stephen Shore

What does it mean to explore the essence of things through photography? Is it possible to show what holds the world together internally—not just its surface appearance? The immaterial is impossible to document directly. Cultural developments and contexts are most clearly manifest in everyday situations, banal objects, unremarkable landscapes, and faceless places. Stephen Shore’s photographic series record, preserve, and reflect on those traces of human life that are normally passed over, considered unworthy of representation. A chronicler of the unspectacular, Shore uncovers the structures  and subtle inner workings of our Western culture. In his work, the act of photographing becomes an attempt to examine the self and the external world, to arrive at deeper understanding through observation. At the same time, his work is an attempt to understand and find new ways of thinking about the medium of photography. Stephen Shore’s conceptual approach and his ongoing experimentation—spanning a range of genres, themes, and techniques—establish him as a pioneer and one of the most important visionaries in photography today; an artist who is continually reinventing himself. Due to the diversity of his different series and projects during his career, at first glance Stephen Shore’s oeuvre seems to fit easily into established documentary and narrative photographic traditions. Yet for Shore, the “decisive moment” is irrelevant, and chance plays only a minor role. He uses these categories and visual languages instead as stylistic devices to give visual expression to his conceptual ideas about reality. Bound only by his own constantly evolving rules, he frees himself from widely accepted conventions of photographic medium and continually explores and redefines its limitations and possibilities. For this reason, Stephen Shore is an important and ever-present point of reference for artists working today, and one of only a very few bridging figures who defy easy categorization solely on the basis of either visual results or working methods.  His system of references reveals the strength of his body of work as a mixture of documentary and artistic reflection. The exhibition includes over 300 pictures–some of them never published. It was organized by Fundación MAPFRE in collaboration with C/O BERLIN, and was curated by Marta Dahó and Felix Hoffmann. C/O Berlin will be the only place of Stephen Shore’s retrospective in Germany. A catalog accompanying the exhibition has been published by Kehrer Verlag. This first retrospective of Stephen Shore’s work unfolds chronologically, shedding light on the three most significant aspects of Stephen Shore’s oeuvre as well as his unique contribution to the culture of photography. The exhibition also presents some of the most important interpretations that his work has inspired over the last four decades.

Reflections on photographic languages
Between 1965 and 1967, Stephen Shore was a regular at Andy Warhol’s Factory, documenting the people and life he encountered there. It was there that he developed his liberated artistic perspective on the medium of photography as an instrument of perception. In the tradition of Walker Evans and Robert Frank, he went on to explore the settings of everyday and consumer worlds in the United States. The resulting works are not visual studies of some concrete status quo but instead capture the essence of individual places as a kind of ambivalent background—thus Shore’s decisive rejection of familiar landmarks and typologies. In formal terms, he experimented with large-format cameras and a snapshot aesthetic as well as with the use of found visual material

Color as an autonomous compositional element

Even in the art photography of the 1970s, color photography was considered commercial and vulgar, Stephen Shore was one of the first photographers to use color as a visual element in a different way as it was at this time. His contribution was akin to a revolution. And although that appraisal now appears anachronistic, it dominates the reception of Stephen Shore’s work up to the present day.

New digital opportunities
In pace with the radical transformation of photography through digitalization, Stephen Shore has sought new opportunities for the distribution and presentation of photographic work, continually exploring the limits of the medium and the immediate reactions of his viewers or followers. Just as in his conceptual works, he works within the (self-imposed) limits of predefined structures when using digital books or Instagram, paired with the idea of imitating photographic essays.

Stephen Shore, born in New York City in 1947, developed an interest in photography at a young age. In 1961, three of Stephen Shore’s photographs were purchased by Edward Steichen, then curator of the Museum of Modern Art in New York. At the age of 18, Shore moved into Andy Warhol’s Factory, where he took photographs, assisted in film productions, and worked as a lighting technician. In 1971, he became the first living photographer to have a solo show at the Metropolitan Museum of Art in New York since Alfred Stieglitz, 40 years earlier. He received fellowships from the National Endowment for the Arts (NEA) in 1974 and 1979. Stephen Shore’s photos and photographic series have been published in numerous books and shown in exhibitions worldwide at institutions including the Tate Modern in London, the Whitney Museum in New York, the Albertina in Vienna, the Jeu de Paume in Paris, and Fotomusuem Winterthur in Switzerland. His works are part of important photographic collections including those of the San Francisco Museum of Modern Art, the Museum of Modern Art, New York, the Pinakothek der Moderne, Munich, and the Deutsche Börse, Frankfurt. Since 1982 he has been the director of the Photography Program at Bard College, Annandale-on-Hudson, NY, where he is the Susan Weber Professor in the Arts. Stephen Shore lives and works in New York City.