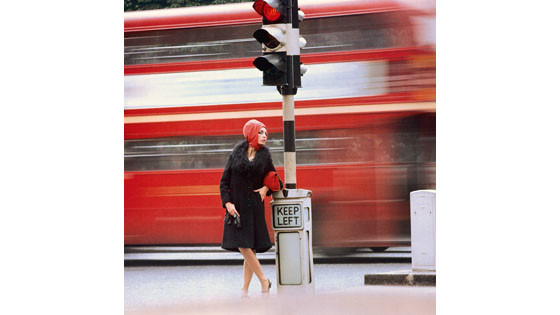 This summer, Foam presents Swinging Sixties London – Photography in the Capital of Cool. The thematic group show immerses visitors in the dazzling London of the sixties, an era bursting with possibilities.

The presentation touches upon all of the remarkable developments in and around photography at the time: fashion, celebrities, music, magazines, design and social change. In the exhibition, Foam brings together the work of iconic photographers of the sixties – who in their heyday were often as famous as the stars in front of their cameras. Featuring work by Terence Donovan, Brian Duffy, John French, Norman Parkinson, James Barnor, John Hopkins, John Cowan, Eric Swayne and Philip Townsend.

In the mid-1960s, the capital of England stood for everything hip, fashionable and cool. In April 1966, America’s Time Magazine even dedicated a complete issue to London: ‘the Swinging City’. “Ancient elegance and new opulence are all tangled up in a dazzling blur of op and pop,” writes Piri Halasz in the legendary cover story. This period in London’s history represents the transformation the capital underwent in the decennia after the war, from a grim, shattered city to an international and lively epicentre for style, culture and fashion.

The Swinging Sixties marked the birth of the superstar, the fan and the individual, but also saw an economic growth which resulted in extensive democratization. From now on, fashion and leisure were available for many more people. attitudes among the younger generation changed, too. In the sixties, the free-spirited baby boomers rebelled against the conservative post-war culture of their parents. These were the golden days for music, design, fashion and style, and it was in London where models became superstars. Pop stars grew even bigger, with bands like The Kinks, The Rolling Stones and The Beatles defining the sound of the sixties.

photographers Terence Donovan and Brian Duffy, well known for their catchy portraits of models, musicians and actors, shape our image of the Swinging Sixties. The photographers are as widely known as the stars and socialites they shot, and perhaps just as infamous as well. These were self-made boys from the poor East End of London. Donovan excels with his fashion photography, narrating series and moving portraits of female and male models. Duffy shot iconic photographs of famous models and personalities like Grace Coddington, Jane Birkin, Mick Jagger and Michael Caine.

With their groundbreaking style and technique, they rebelled against the day’s leading photographers, John French and Norman Parkinson, who themselves were important for British fashion photography in their own right, and had proven to be influential pioneers in the preceding decennia. Also Eric Swayne, whose archive was recently rediscovered, is featured in the exhibition. Swayne was in close contact with rock stars and top models, which is how he managed to shoot his intimate portraits. John Cowan made the optimism of his generation visible by literally letting his models kiss the sky. James Barnor’s photographs, featuring British-African models, demonstrate the social changes of the time.

Youth culture and social change will be magnificently addressed through the work of lauded protest leader and photographer John ‘Hoppy’ Hopkins, accompanied by the moving and often cheerful shots by society photographer Philip Townsend. These are enriched with examples from music, film, magazines, fashion and design. The presentation breathes the Capital of Cool in many ways, and offers a comprehensive experience of swinging London in the sixties.