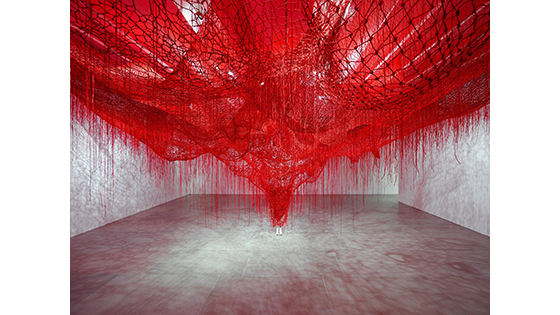 Shiota Chiharu: The Soul Trembles is the first grand-scale exhibition in Korea containing works from Shiota Chiharu’s early career in the 1990s through to the present, illustrating the artist’s growing international reputation. It is co-organized by the Busan Museum of Art and Mori Art Museum in Tokyo, Japan, curated by Mami Kataoka, Deputy Director and Chief Curator of Mori Art Museum where it elicited a great response from visitors after opening at Mori Art Museum in June, 2019. Following upon that exhibition at Mori Art Museum, her solo exhibition in Busan centers around four large-scale installation pieces, but features approximately 110 works that allow a comprehensive look at the artist’s activities over the past 25 years.

She is continuing to work with various genres, ranging from large-scale immersive installations incorporating thread and common objects, to sculptural works, photographs, drawings, video, and performance.Through works that visualize questions of the soul, immeasurable anxiety and fear, and her inexplicable existence, the artist expresses an inner state of confronting uncertainty and seeks the meaning of ‘existence’. Utilizing common objects such as thread, dresses, chairs, beds, shoes and bags, the artist creates vast spaces where the memories and relationships embedded in objects are explored. For the artist, the theme of “death” has been a longstanding concern, together with existence and the realm of the unconscious. Her works embody the fear of death she felt at family graves as a child, and the feelings of sorrow and trauma experienced on the border between life and death through two battles with cancer. By capturing these through her works, Shiota approaches death as the beginning of a new life.

Most of her works arise from her personal experiences. However, her works act as the same psychological mechanism for audiences as well to recall life, death and forgotten memories. Going into the 2000s, the artist produced large site-specific installations employing black thread and materials such as window frames, constructing a distinctive formative world of her own. In particular, she is known foremost for her series of immersive installations in which entire spaces are strung with red or black thread, unfolding like human blood vessels or spider webs. The subtitle “The Soul Trembles” references Shiota’s earnest wish to convey to others soul-trembling experiences derived from nameless emotions. In works that elicit ontological thought, she provokes soul-searching of an emotional and primal nature, and her artworks continually raise other questions. These may stem from this time of uncertainty we live in today, when it is increasingly difficult to predict where the many invisible connections in the lives of every individual are leading. Some things that are invisible to humans (the soul, fate, death), along with that uncertainty, may represent fears that are hard to face, and yet they are questions that are ultimately inevitable. Shiota Chiharu: The Soul Trembles is an exhibition that promises to offer an opportunity to reflect on the existence of the individual and to produce new relationships.

Shiota Chiharu (b. 1972) was born in Osaka, Japan, graduated from Kyoto Seika University, and moved to Germany in 1996. She subsequently studied at the University of Fine Arts Hamburg (HFBK), the Braunschweig University of Art (HBK), and the Berlin University of the Arts. Currently based in Berlin, she continues to work internationally. Since her first solo exhibition in 1993, the artist has shown her works in over 300 solo and group exhibitions. She has also participated in numerous international events, including the Sydney Biennale (2016), Busan Biennale (2014), Kiev First International Biennale (2012), and Yokohama Triennale (2001). In 2015, she represented Japan at the 56th Venice Biennale International Art Exhibition, where her work was praised by audiences and art officials.