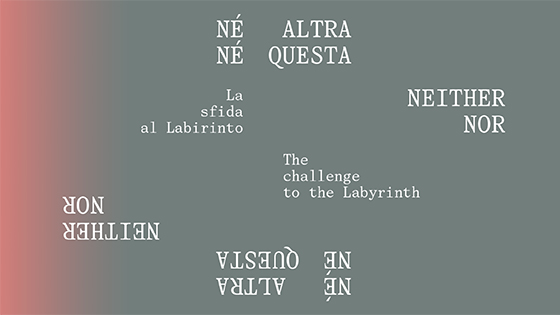 Italian Pavilion at the Venice Biennale. Neither Nor: The challenge to the Labyrinth

Neither Nor: The challenge to the Labyrinth (Né altra Né questa: La sfida al Labirinto) is the title of the exhibition for the Italian Pavilion at the 58th Venice Biennale, curated by Milovan Farronato and featuring work by Enrico David (Ancona, 1966), Chiara Fumai (Rome, 1978–Bari, 2017) and Liliana Moro (Milan, 1961).

The subtitle of the project alludes to La sfida al labirinto (The Challenge to the Labyrinth), a seminal essay written by Italo Calvino in 1962 that has been the inspiration for Neither Nor. In this text the author proposed a cultural work open to all possible languages and that felt itself co-responsible in the construction of a world which, having lost its traditional points of reference, no longer asked to be simply represented. To visualize the intricate forms of contemporary reality, Calvino turned to the vivid metaphor of the labyrinth: an apparent maze of lines and tendencies that is in reality constructed on the basis of strict rules.

Interpreting this line of thought in an artistic context, Neither Nor—whose Italian title, Né altra Né questa, already uses the rhetorical figure of the anastrophe to disorientate—gives agency to a project of ‘challenge to the labyrinth’ that takes Calvino’s lesson on board by staging an exhibition whose layout is not linear and cannot be reduced to a set of tidy and predictable trajectories. Many generous journeys and interpretations are offered to the public, whom the exhibition entrusts with the chance to take on an active role in determining the route they will take and thereby find themselves confronted with the result of their own choices, accepting doubt and uncertainty as inescapable parts of understanding.

The exhibition is accompanied by a Public Program including talks by Enrico David, Liliana Moro and Prof. Marco Pasi, as well as the presentation of Bustrofedico (“Boustrophedon”), a new experimental short film by Italian filmmaker Anna Franceschini documenting the exhibition, produced by In Between Art Film and Gluck50, to be premiered in Venice at the end of the show. The Educational Program, promoted by the Directorate-General for Contemporary Art and Architecture and Urban Peripheries (DGAAP) of the Ministry for the Cultural Heritage and Activities, invites participants to collectively study and perform a choreography conceived by Christodoulos Panayiotou (Limassol, Cyprus, 1978), inspired by the ‘Dance of the Cranes’ which, according to the ancient Greek poet Callimachus, celebrated Theseus’s escape from the Labyrinth of Knossos. The Programs are curated by Milovan Farronato, Stella Bottai and Lavinia Filippi, and will be held in the spaces of the Italian Pavilion.

Neither Nor: The challenge to the Labyrinth will be accompanied by a bilingual catalogue published by Humboldt Books, with essays by Stella Bottai, Italo Calvino, Enrico David, Milovan Farronato, Lavinia Filippi, Chiara Fumai, Liliana Moro, Christodoulos Panayiotou, Emanuele Trevi.

The Italian Pavilion is realized also with the support of Gucci and FPT Industrial, main sponsors of the exhibition, and the contribution of the main donor Nicoletta Fiorucci Russo. Special thanks also go to all the other donors for their fundamental contributions to the project; we are grateful as well to the technical sponsors Gemmo, C&C-Milano and Select Aperitivo.

Neither Nor: The challenge to the Labyrinth
Italian Pavilion at the Venice Biennale
May 11–November 24, 2019 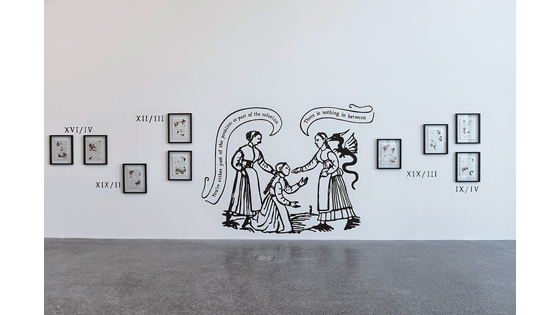