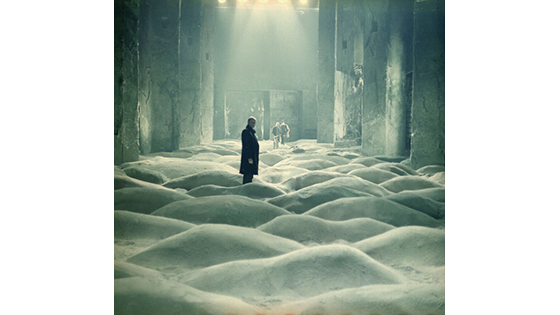 With associative films rich in imagery, such as Andrei Rublev (1966), Solaris (1972), The Mirror (1974) and especially Stalker (1979), Andrei Tarkovsky (1932‒1986) made his name as a leading innovator of the language of cinema. This autumn, Eye presents an exhibition and film programme devoted to the celebrated filmmaker and mystic, focusing specifically on Tarkovsky’s quest for existential truth. In addition to immersing the visitor in Tarkovsky’s imagery, the exhibition includes unique documents — letters, photos and Polaroids — that have never previously been displayed in the Netherlands. Moreover, the accompanying film programme features digitally restored films.

The work of Andrei Tarkovsky weaves together dreams and memories, past and present. The painterly beauty of his images, his metaphysical reflections on humanity, and his lucid observations about cinema still inspire new generations of filmmakers and artists. Filmmakers such as Béla Tarr and Alexander Sokurov are considered his most direct descendants in the world of film.

inner voice, personal visual idiom
Beyond the straitjacket of social-realist Soviet cinema, Tarkovsky developed a unique body of work in which he saw life as a spiritual quest for truth and self-knowledge. He called it the ‘inner voice of humankind’, which could only be heard within range of the magical and transcendental. He saw his films as ‘hieroglyphics of absolute truth’, acts of non-rational creation that, more than analytical science, were capable of revealing existential meaning.

For Tarkovsky, who died in 1986, film was the ideal medium for getting close to ‘real’ life. Of all the arts, film comes closest to the laws and patterns of human thought and life, he contended — and that made it the most truthful form of art. The style of Tarkovsky’s films was determined by extremely long takes, a very slowly moving camera, remarkable use of sound and music, and an alternation of coloured and monochrome sequences.

The exhibition has been conceived to get as close as possible to Tarkovsky and his work. That is why it will immerse visitors in the director’s imagery, intoxicating them, as it were, with numerous precisely chosen fragments from his films. This approach follows the ideas of the filmmaker regarding the ‘poetry of the image’ and the necessity of a ‘poetic logic’ and a ‘poetic montage’.

Especially unique is the collection of Polaroids and photographs – never previously shown in the Netherlands – made by Tarkovsky in a private capacity and while filming. The exhibition will also include material from Tarkovsky’s private archives, including letters, scripts and other documents that have never before been presented. These mementos of Tarkovsky’s personal and professional life have been made available by Tarkovsky’s son Andrei Andrejevich Tarkovsky.

The accompanying programme features Tarkovsky’s entire body of work, mostly in the form of digital restorations, including The Mirror (1974), Solaris (1972),  and his last film, The Sacrifice (1986). Also included are films by directors who inspired Tarkovsky (Sergei Parajanov, Robert Bresson) and by directors who Tarkovsky inspired (Lars von Trier, Alex Garland). Six of Tarkovsky’s films will be distributed nationally by Eye.

For those interested in Russia’s Soviet past, a six-part lecture series is being organized in collaboration with Russia expert Otto Boelen from Leiden University.

The art magazine Kunstschrift will publish a special issue devoted to Tarkovsky.

Founded in 2012, Eye Filmmuseum in Amsterdam was based on the former Dutch Cinematheque and focuses its exhibition programme on the intersection between film and visual arts. Eye explores the interplay between film and visual arts and vice versa. Recent exhibitions have been organised with artists and filmmakers such as William Kentridge, Ryoji Ikeda, Jesper Just, Apichatpong Weerasethakul, João Gusmão & Pedro Paiva, Anthony McCall, Jan Svankmajer and many others.