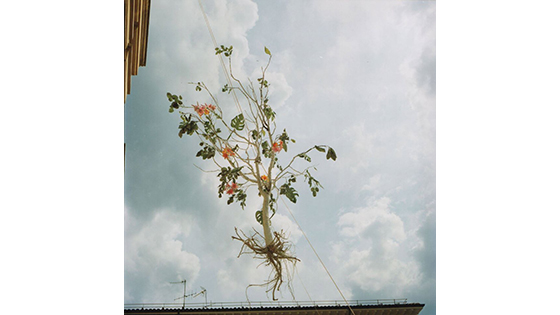 After exhibiting established and prominent photographers, or artists, with a long career in photography behind them yet barely or not at all prominent in Belgium, we are now instigating a third approach by introducing the work of photographers to whom we are offering a first exhibition. 2017 is an anniversary year for the A Stichting Foundation and to start with our guest is Italian photographer Cesare Fabbri. The Flying Carpet exhibition brings together and presents three series of photographs by the artist. There is a literary quote and a specific framing colour, nero, bianco, grigio, for each of the three series.

The 21 photographs in the first series were all taken in 2009 by Cesare Fabbri in the Garfagnana forest, a huge area of beech trees located between the Apuan Alps in northern Tuscany and the Tuscan-Emilian Apennines. Each image in the Orlando series displays initials engraved on tree bark. Over time, the trees extend and the bark swells but the marks remain. This scarification marks a visit, now a scar on the body of the tree it blends with the shadow of the foliage projecting itself onto the tree trunks. This forest of emotions is reflected in the epic poem Orlando Furioso, a stunning kaleidoscope of fabulous adventures, written between 1505 and 1523 by Ludovico Ariosto (1474-1533) appointed governor to the province of Garfagnana by the Duke of Ferrara, Alphonso d’Este. The brother of the Duke of Ferrara, Cardinal Ippolito (I) d’Este, guardian of Ariosto, questioned the latter about his work: ‘Master Ludovico, where on earth did you find all this nonsense?’ In canto 23 out of the 46 comprising this canto, blending the tragic with the pleasurable and the lyrical with the romantic, the paladin Orlando takes leave of his senses after discovering the initials of his beloved Angelica and her lover Medoro, engraved on the bark. ‘Turning him round, he there on many a tree, Beheld engraved, upon the woody shore, What as the writing of his deity. (…) He would discredit in a thousand modes, That which he credits in his own despite’(Orlando Furioso, Canto 23).>

There is no respite for the fearsome knight Orlando who ends up uprooting the ancient trees with great fanfare. The 46 cantos are truly labyrinthine with events upsetting the status quo and where meaning and narrative become lost like in a dark forest where dreams lurk from tree to tree.

« Like parables and fables, carpets too only deal with what is real, thus touching geometries of the spirit, contemplative mathematics. It would therefore be reductive, to speak of symbolism when discussing carpets, parables and fables, since the obvious meaning and the hidden meaning are indissolubly tied together in the threads of the carpet and in the narratives, and that we may read (…) a message that is addressed to each of us alone and to no-one else ». Cristina Campo, Tappeto Volante, Gli Imperdonabili, 1987

The first image of the second series features on the front cover of the book with the same title as the exhibition, a contre-jour image of a sunny shop window covered by paper and concealed by a blind, whereas the book ends with an image of a fake cloud just passing. The Flying Carpet is a collection of photographic surprises, pre-existing, floating images, curious or funny objects and bizarre situations collected by the artist along paths and roads in Emilia-Romagna and Sardinia from 2005 to 2015. Not only is each image amazing in itself, but the sequencing also intensifies the impression of implausibility and strangeness. A selection of these images was published in 2010 by Platform in a small book called Un Mondo di carta (A World of Paper). Disturbing the world. The flying carpet is a strange drone, a means of symbolic and fantastic transport letting you circumnavigate the world and represent it. With his charming photos, almost satellite images, Cesare Fabbri seeks the appropriate geometry to describe the world, with a certain humour, gathering fragments, slithers and chips one after another.

« The smell of it is in the air: the sun. The smell of pure fire, deprived of any fuel pungency. And the smell of dry stone and heather. And snakeskin. Smells of Sardinia… »
Elio Vittorini, Sardegna come un’infanzia, 1932 END_OF_DOCUMENT_TOKEN_TO_BE_REPLACED