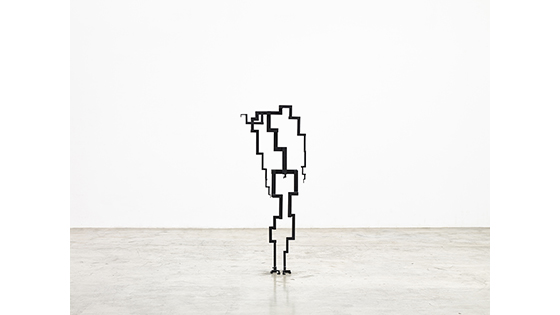 THE GALLERIE DEGLI UFFIZI IS PLEASED TO ANNOUNCE

‘Can an object be the catalyst for new thoughts and behaviours?’ Antony Gormley

This exhibition – which is to be held in the Aula Magliabechiana in Uffizi from 26 February to 26 May 2019 – brings together works of different materials and scales that explore the body in space and the body as space. There are 12 works in the expansive new ground floor gallery, where natural light will play into 12 discrete vaulted spaces defined by six stone columns and no internal walls. Two further works are placed in the context of the historic collection and another is installed on the terrace of the Uffizi. At the core of the show there is a dialogue between two sculptures, Passage and Room, made 35 years apart. Both deal with the space of the body. Passage (2016), a 12 metre-long Corten steel tunnel in human form – allows viewers to enter, while Room (1980), a set of the artist’s clothes cut into a continuous 8 millimetre-wide ribbon expanded into an enclosure 6 metres square, keeps them out. The show is predicated on these two works and the dialogue between stasis and movement: imaginative and actual space. The artist states: “I use the indexical impression of my own living body rather than mimesis to make work that both displaces and encloses, to engage and activate attention.” There are a number of specially made new works in the exhibition, including Veer II (2018), a three-dimensional life-size cast iron evocation of a tense nervous system at the core of the body, and Breathe (2018), a large lead- covered expansion work that applies the cosmic principles of the Big Bang to the singularity of a subjective body. Interaction with the city’s precious cultural heritage, and with the Uffizi in particular, is the prerogative of to two examples of the bodyform Another Time: one is placed amongst the classical sculptures on the piano nobile and the other is installed outdoors on the terrace of the Uffizi, looking out over Piazza della Signoria. A third instance of interaction with the Uffizi’s historic collection takes the shape of a room devoted to dialogue with the Sleeping Hermaphrodite, a Roman copy from the imperial age of a 2nd century BC Hellenistic original resting on a plinth, and the floor-hugging blockwork, Settlement(2005).

Departing from ideas about an exhibition as a space for aesthetic contemplation or the enjoyment of narrative or representation, Essere invites our active participation as connectors between defined objects and open space in which mass and void, dark and light, hard and soft engage the viewer’s presence in space. END_OF_DOCUMENT_TOKEN_TO_BE_REPLACED