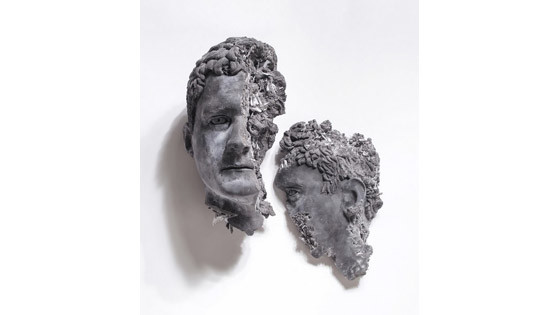 Following Daniel Arsham’s two previous solo shows at Galerie Perrotin, Paris and Hong Kong – “The Future is Always Now” and “#FUTUREARCHIVE” in 2014 and 2013, respectively – this new exhibition furthers the artist’s current exploration of geological materials that he began using four years ago to give a concrete body to his concept of “Fictional Archeology”. In fact, his travels to Easter Island in 2011, where he spent some time observing archeologists at work in a dig site, provided the creative kernel for this ongoing series. While the archeologists there were pulling past artifacts out of the ground, Arsham came to understand that archeology was also, in a way, a work of fiction. Archeologists need to invent – at least in part – a story to reconstruct a plausible truth for their discoveries. Yet who knows for certain what really happened?

Whatever may have been, storytelling or the account of historical anecdotes, whether true or false, is not what ultimately inspired Daniel Arsham per se. Rather, the artist is interested in infusing his own work with the fictional dimension of archeology. He would like us to imagine that we could travel to the future and look back at his cast relics of the present from a dislocated, curious point of view. For his sculptures of contemporary human figures and modern artifacts to convey this mysterious archeological aura, they must appear as if they really had been buried in the ground for a number of years before being excavated, which the use of geological materials – here mainly selenite, volcanic ash, chalk, and sand – allowed the artist to tangibly and successfully achieve without employing the artificial means of a trompe l’oeil painterly effect. Indeed, the earthen materials appear within his molds the exact same way that they would in nature, which strengthens their believable authenticity. After all, how does the saying go: from dust you were made, and to dust you will return? END_OF_DOCUMENT_TOKEN_TO_BE_REPLACED