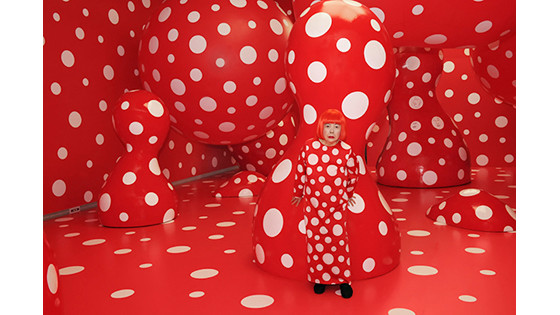 In 1957 Yayoi Kusama left Japan for New York. Here, at the heart of the vibrant 1960s art scene, she created many of her seminal works, characterised by the impulse to allow one shape or pattern take over and repeat itself infinitely. In the series Infinity Nets, Kusama methodically filled large canvases with semicircles in white, impasto oil paint, like the mesh of an infinite net. It is a painterly practice where the process itself is tangible, bordering on performance, and the works have an energy that comes from the charged concentrated effort Kusama has put into each painting. In her series of Accumulation Sculptures, everyday objects are covered with stuffed, phallic textile protuberances, a poignant theme that challenged the caucus of male critics. The late 1960s was an intensely creative period for Kusama, and her artistic activities expanded to breaking point. She organised collective art happenings, orgies, political performances and staged Anti-war protests. The participants wore clothes designed by Kusama, but just as often the clothes came off, in protest against the establishment. In Body Paint Festivals Kusama painted polka dots on nude bodies and appointed herself the “High Priestess of Polka Dots”. She founded the magazine Kusama’s Orgy and designed avant-garde fashion for her own label, The Nude Fashion Company. As a non-Western woman in a then excluding, male art world, Yayoi Kusama was an outsider, a position she emphasised and occasionally played with. END_OF_DOCUMENT_TOKEN_TO_BE_REPLACED