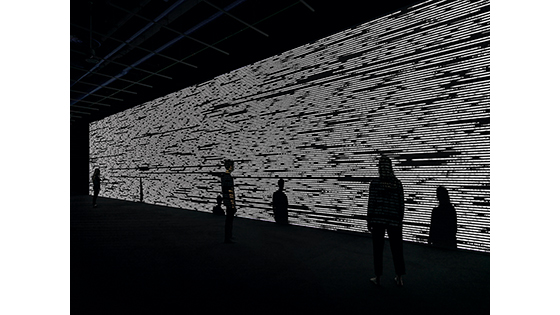 Ryoji Ikeda – A Cosmic Journey from Infinitesimal to Astronomical

Ryoji Ikeda’s solo exhibition is on view on the ground floor of Taipei Fine Arts Museum until November 17, 2019. TFAM curator Jo Hsiao and guest curator Eva Lin have joined forces for the most comprehensive solo exhibition of works spanning Ikeda’s career in Asia since 2009. The selected artworks include large-scale sound sculptures, audiovisual installations, light boxes and two-dimensional works, which are newly conceived and exhibited for the very first time, forming an immersive space-time landscape that vaults from microscopic to macroscopic dimensions.

Ryoji Ikeda is one of only a few artists renowned internationally for both visual and sound art. His artistic explorations range from math, quantum mechanics, physics and philosophy to synthesized audio tones, music and video. His live performances, installations, and long-term projects involving print publications and music recordings constitute a distinctive creative terrain. Ikeda has exhibited around the world, including Park Avenue Armory in New York, the Centre Pompidou in Paris, the Museum of Contemporary Art Tokyo, ArtScience Museum in Singapore, and the ZKM Center for Art and Media in Karlsruhe, Germany. He is the recipient of the 3rd Prix Ars Electronica Collide @ CERN, winning the artist-in-residence program at CERN. Even though he never received formal training in art or music, Ikeda began absorbing music from a broad spectrum of genres at an early age, and later he began experimenting with editing music, manipulating magnetic tape and toying with sound frequencies. In 1994 he became a member of the multimedia art collective Dumb Type, whose works involved exhibitions, theater, dance, music and publishing. Through these cross-disciplinary collaborations, Ikeda turned his attention to theater and art exhibitions. Later, he began to do sound art performances and became active in music festivals, creating sound installations and releasing albums.

By 1995 Ikeda had begun to gradually abandon the use of repetitive musical elements in his sound creations, instead exploring the fundamental question, “What is sound?” and launching an in-depth study of its physical nature. Thoroughly reducing sounds down to their smallest units, he then rearranged and reassembled them, employing such basic elements as pure sine waves and white noise to create composite soundscapes with shifting resonances, and challenging the limits of human aural perception. In this way, he became a pioneer of minimal electronic music. Since 2000, he has followed this spirit of questing for the essence, breaking the basic structure of light down to the level of pixels, while reducing the world to data. Ikeda makes art with the mindset of a composer, incorporating physical phenomena such as sound, light, space and time as elements in his compositions. Achieving a precise expressive structure through the use of mathematical calculations, he transforms rigorous arithmetic logic into artistic forms, endowing his works with his own unique data aesthetic. END_OF_DOCUMENT_TOKEN_TO_BE_REPLACED