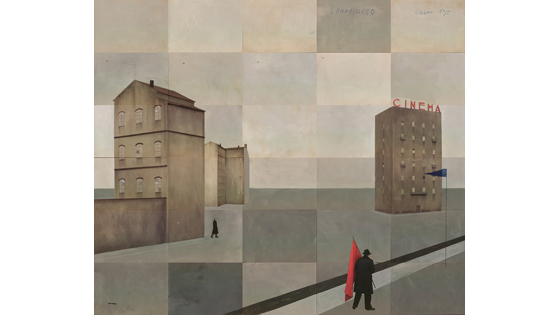 I’ve always loved the city.
I like the place where it ends because the buildings are easy to
discern, the old houses with the gardens around them.
I like the city outside its walls running away as though liberated.
I like to look at it from a train, sideways, when you enter it.
I would have liked to live in the same city without having ever left.
As a child I thought it was infinite.
– Paolo Ventura

Italian photographer Paolo Ventura (born 1968) is known for constructing and photographing elaborate dioramas to tell cinematic visual stories. Previous projects include War Souvenir (2006), which traced the horrors of a fictionalized war, and Winter Stories (2008), which looked back on the life of a circus performer in the winter of his life. Most recently, Ventura was asked to create the set design for the Lyric Opera of Chicago’s Roger and Hammerstein production of Carousel. The New York Times wrote of his set design, “The result is an artful depth that allows the emotions of the songs – “If I Loved You,” “You’ll Never Walk Alone” and others – to resonate.”

With Ventura’s latest body of work, La Citta Infinita, he takes his process one step further by painting the photographs of constructed scenes and adding collage. The works, which are evocative of 1940s and 50s Italian Neorealism film, present lonely yet dreamy cityscapes punctuated by human figures, always Ventura himself, in varying costume. Although the scenes differ, the horizon lines remain the same, creating a never-ending cityscape, La Citta Infinita.

Paolo Ventura studied at the Accademia di Belle Arti di Brera in Milan in the early 1990s. His work has been exhibited internationally, including at the Forma International Center for Photography, Milan; Museum of Contemporary Art of Roma (MACRO), Rome; The Hague Museum of Photography, The Hague; Galleria Nazionale d’Arte Moderna, Rome and during the Rencontres de la Photographie, Arles. In 2012, he was selected to create a series of works for the Italian national pavilion at the 54th Venice Biennale, he also received a commission from the Museum of Contemporary Art of Rome. And recently Ventura was invited for a commission by the MART, the Museum of Modern and Contemporary Art of Trento and Rovereto, Italy. Four monographs of Paolo Ventura’s work have been published: War Souvenir (Contrasto, 2006), Winter Stories (Aperture and Contrasto, 2009), The Automaton (Peliti Asociati, 2011) and Lo Zuavo Scomparso (Punctum Press, 2012). Ventura currently lives and works outside of Milan.