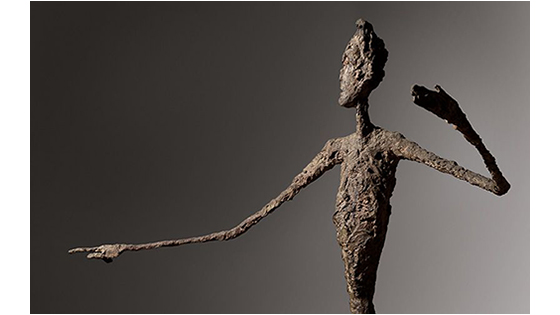 Celebrated as a sculptor, painter and draughtsman, Alberto Giacometti’s distinctive elongated figures are some of the most instantly recognisable works of modern art. This exhibition reasserts Giacometti’s place alongside the likes of Matisse, Picasso and Degas as one of the great painter-sculptors of the 20th century. Through unparalleled access to the extraordinary collection and archive of the Fondation Alberto et Annette Giacometti, Paris, Tate Modern’s ambitious and wide-ranging exhibition brings together over 250 works. It includes rarely seen plasters and drawings which have never been exhibited before and showcases the full evolution of Giacometti’s career across five decades, from early works such as Head of a Woman [Flora Mayo] 1926 to iconic bronze sculptures such as Walking Man I 1960.

While Alberto Giacometti is best known for his bronze figures, Tate Modern is repositioning him as an artist with a far wider interest in materials and textures, especially plaster and clay. The elasticity and malleability of these media allowed him to work in an inventive way, continuously reworking and experimenting with plaster to create his distinctive highly textured and scratched surfaces. A large number of these fragile plaster works which rarely travel are being shown for the first time in this exhibition including Giacometti’s celebrated Women of Venice 1956. Created for the Venice Biennale, this group of important works are brought together for the first time since their creation.

The exhibition also explores some of the key figures in the artist’s life who were vital to his work including his wife Annette Giacometti, his brother Diego and his late mistress Caroline. Alberto Giacometti’s personal relationships were an enduring influence throughout his career and he continuously used friends and family as models. One room in the exhibition focusses specifically on portraits demonstrating Giacometti’s intensely observed images of the human face and figure.