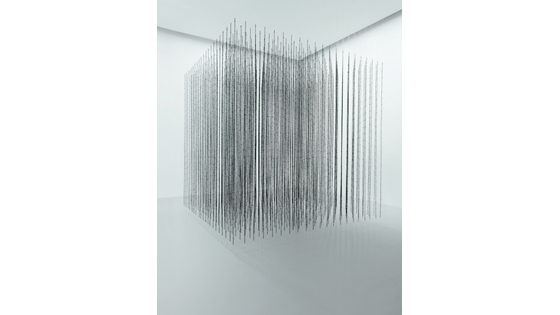 Mona Hatoum creates a challenging vision of our world, exposing its contradictions and complexities. Hot Spot is a steel cage-like neon globe which buzzes with an intense, mesmerising yet seemingly dangerous energy. Elsewhere electricity crackles through household objects, making the familiar uncanny.
This is the first major survey of Hatoum’s work in the UK, covering 35 years from her early radical performances and video pieces, to sculptures and large-scale installations.
Born in Beirut in 1952 to a Palestinian family, Mona Hatoum settled in England in 1975 after war broke out in Lebanon. She is represented in major collections around the world, has shown at the Venice Biennale in 1995 and 2005, was nominated for the Turner Prize in 1995, received the Joan Miró Prize in 2011 and will be awarded the Hiroshima Art Prize in 2017.
Through the juxtaposition of opposites such as beauty and horror, Hatoum engages us in conflicting emotions of desire and revulsion, fear and fascination.
Immerse yourself in the work of one of the most important artists working today. 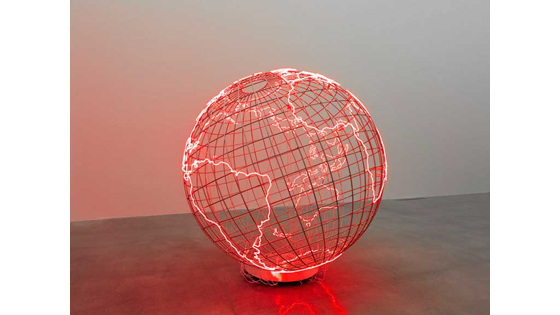 The exhibition provides audiences with a journey through her output based on formal and sensitive affinities between the works. In this way, the performances of the Eighties, whether documented in photos, drawings or videos, are seen in relation to installations, sculptures, drawings, photographs and objects dating

In a world driven by contradictions, geopolitical tensions and diversified aesthetics, Mona Hatoum offers us an output that achieves unrivalled universality ? a body of work that has become a “model” for numerous contemporary artists. The Palestinian-born British artist is one of the key representatives of the international contemporary scene. Her work stands out for the relevance of its discourse, the perfect match between the forms and materials used, the multidisciplinary aspect of her work and her original, committed reinterpretation of contemporary art movements (performance, kineticism and minimalism).

After staging the first museum exhibition dedicated to Mona Hatoum’s work twenty years ago, the Centre Pompidou is now devoting its first major monograph exhibition to her, featuring a hundred-odd pieces, and covering the multidisciplinary aspect of her work from 1977 to 2015. Without any chronological order, similar to a “map” of her career path, the exhibition provides audiences with a journey through her output based on formal and sensitive affinities between the works. In this way, the performances of the Eighties, whether documented in photos, drawings or videos, are seen in relation to installations, sculptures, drawings, photographs and objects dating from the late Eighties to the present day.

Mona Hatoum, born in the Lebanon in 1952 to parents of Palestinian origin, left that country in 1975 for a short stay in London just when war broke out in her homeland. She remained in the British capital, and began to study art. Her work falls into two main periods. During the 1980s, she explored the realm of performance and video. Her work at that time was narrative, and focused on social and political questions. From the 1990s onwards, her output has involved more “permanent” works ? installations, sculptures and drawings. Now situating herself as part of the avant-garde, Mona Hatoum explores installations influenced by kineticism and phenomenological theories, and other installations that can be defined as post-minimalist, using materials found in the industrial world (grids and barbed wire), or in her own environment (hair). Some of these installations and sculptures, most of which have a political dimension, are imbued with feminism. Around her gravitate somewhat Surrealist objects, works on paper produced with unusual everyday materials or photographs taken during trips, which have a link with other works in the exhibition. We talk to the artist. END_OF_DOCUMENT_TOKEN_TO_BE_REPLACED