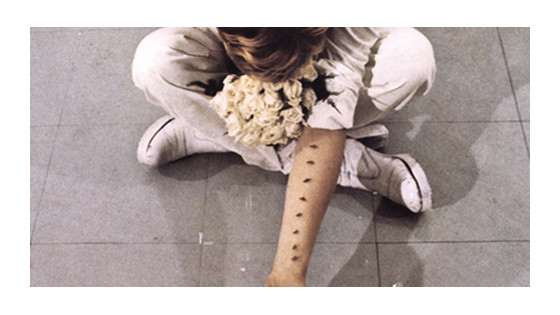 The Body As Language : Women And Performance

On the 40th anniversary of Lea Vergine’s seminal book Body Art and Performance: The Body as Language (1974), Richard Saltoun Gallery presents The Body As Language: Women And Performance.

The exhibition, curated by Paola Ugolini, examines the birth and development of performance art in relation to gender, the body, language and the expression of the self. Focusing on women artists working in Italy during the 70s, the exhibition features work by Gina PANE, Ketty La ROCCA, Suzanne SANTORO and Renate BERTLMANN, together with the archival photographs of the dance performances of Trisha BROWN, Simone FORTI and Yvonne RAINER.

In addition, the exhibition looks at the enduring influence of these artists on a younger generation: Silvia GIAMBRONE, Alice SCHIVARDI and Sara GOLDSCHMIED & Eleonora CHIARI.

Gina PANE (b.1939 – d.1990): her performances have been pivotal for generations of performance artists who have explored the body in extreme situations and actions. In Action II Caso n°2 sul Ring (1976), she simulates a boxing match of four rounds in which she is the only fighter, alternating between self-wounding, gesturing, interacting with her reflection in the mirror and playing with a toy horse.

Ketty La ROCCA (b.1938 – d.1976) gives to linguistic expression her personal ‘feminine’ form, by breaking down the stereotypes of communication. In Le mie parole, e tu? (1975) her hands are symbolically connected to female labour as she performs a choreographed form of visual poetry.

Suzanne SANTORO (b.1946) was born in New York and settled in Rome, where she participated actively in Carla Lonzi’s Rivolta Femminile feminist movement. Her studies in classical art and Roman sculptures led her to publish Towards New Expression in 1974; an iconological examination of the depiction of female genitalia in classical statuary. The work was famously censored in the Artist’s Books exhibition held at the ICA in 1976.

At the 1977 premiere edition of the International Week of Performance in Bologna, Viennese artist Renate BERTLMANN (b.1943) presented her Deflorazione in 14 Stazioni. The artist penetrated 14 paper sheets wearing silicone pacifiers and fake plastic breasts, with scalpels replacing the nipples. The act of rupturing the paper replicated the sexual act of losing one’s virginity and the subsequent feelings of pain, joy, fear, and aggression.

Fabio Sargentini’s famous Rome gallery L’Attico functioned as a space for avant-garde performances during the 1960s and 1970s. These actions and performances reflected the radical changes in art production and society at large by challenging and questioning the role of the artist, the art market, the public and the gallery space itself. The performances at L’Attico are considered to be the earliest performances held in a private gallery in Europe. The gallery regularly hosted contemporary dancers from New York: Trisha BROWN (b.1936), Simone FORTI (b.1935) and Yvonne RAINER (b. 1934). These performances were documented and photographed by Roman photographer Claudio ABATE (b. 1943).

Alice SCHIVARDI (b.1976); her work reflects the encounters she has with different individuals, whom she makes the subject of her creative process. In this show she exhibits Coccinelle (2010-2015), a 32-part embroidery piece with each framed work illustrating a different memory, person, or experience.

In Dispositvi di Rimozione (2012), GOLDSCHMIED & CHIARI (Sara GOLDSCHMIED (b.1975) & Eleonora CHIARI (b.1971), tackle the contemporary history of Italy during the ‘strategy of tension’ years (1969-1980). A series of six collages incorporating pages from vintage magazines, each dating back to the historical events they refer to. The resulting images present a violent contrast between the black and white historical images depicting the massacres and the full colour sexy pin-ups from the period.

Silvia GIAMBRONE (b.1981) invites the viewer to reflect and understand the dynamics of power in everyday life and in human relationships. In Vertigo (2015), a photographic series realised during a residency at the New York ISCP earlier this year, the artist reflects on domestic violence by pairing up everyday objects such as a twine and a plate: apparently harmless, these objects are instead rendered disturbing and threatening by their placement next to one another.