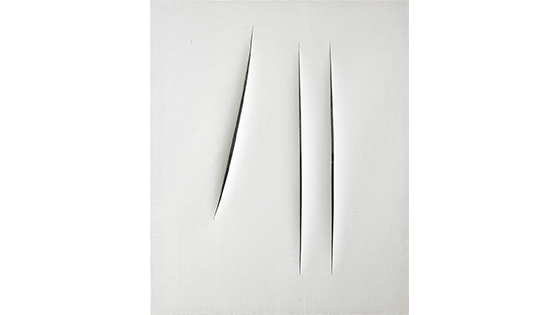 A century ago, Kazimir Malevich’s Suprematist paintings heralded a revolutionary new interpretation of white, in which total abstraction suggests the utopian and the infinite. Since then, artists have deployed the achromatism of whiteness in an endless range of formal and symbolic ways, evoking states of emptiness and effacement, and summoning the raw potential of the blank page. Working in different contexts and with different ends in mind, the artists in Blanc sur Blanc find unexpected power and substance in what appears at first to be an absence or lack.

In 1946, Lucio Fontana and his students drafted the Manifesto Blanco, a vision for a fundamentally new method of artistic production that demanded that artists engage with the real-world physicality of their materials instead of treating the canvas as an illusory, self-contained space. It was out of this impulse that Fontana produced Concetto Spaziale, Attese(Spatial Concept, Waiting, 1966), one of his first slashed canvases. For Fontana, the painting’s allover coat of white formed a blank screen and acted as a vehicle for heightened drama, with any connotations of purity or tranquility disrupted by his forceful incisions.

During the last decade of his life, Andy Warhol broke with the visual and conceptual language of Pop art to produce idiosyncratic takes on abstract and gestural painting. Abstract Painting (1982) is one such work. Measuring forty inches square—the same dimensions that Warhol used previously for his notorious Society Portraits—the canvas is veiled in a white wash that permits only tantalizing glimpses of multicolored swirls beneath.

LEAN (2005) exemplifies Rachel Whiteread’s practice of concretizing negative space in order to memorialize it. Here she has cast the interiors of various cardboard boxes in plaster of paris as a somewhat wistful tribute to the banal, quotidian container. The resulting geometric accumulation of minimalist white slabs is propped up casually against the gallery wall, ghostlike yet palpable.

Also on view are three recent pieces by Paris-based artist Sheila Hicks, whose textile works incorporate yarn-based techniques from diverse cultures. While Hicks’s oeuvre is characterized by intense color, she also works with natural undyed fibers. Here she has fashioned spheres, woven rectangular canvases, and tumbling cascades of linen in neutral shades that exude a tactile yet meditative calm. 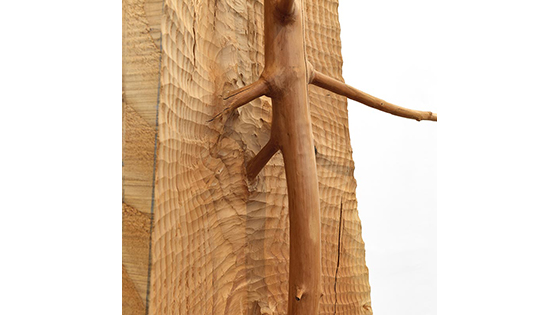 “Trees appear as solid beings, but if we observe them through time, in their growth they become a fluid, malleable matter. A tree is a being that memorizes its own shape and this shape is necessary to its life. Therefore, it is a perfect sculptural structure, because it carries the necessity of existence.” – Giuseppe Penone

The exhibition takes place in the extraordinary first floor of Palazzo della Civiltà Italiana, which FENDI has restored and opened to the public for exhibitions and installations.

Matrice is a unique opportunity to admire a selection of historical works and new productions realized specifically for this occasion by Giuseppe Penone, one of the greatest living sculptors. The exhibition features 17 artworks that date from the 1970s to the present, including many that are rarely seen and will be shown in Italy for the first time.

The entire exhibition has been conceived in dialogue with the monumental architectural spaces of the Palazzo della Civiltà Italiana, presenting a collection of artworks that contrast the clear-cut geometry and the marble facets of this building.

The exhibition is named after one of Giuseppe Penone’s most spectacular works, Matrice (2015), a 30-meter-long sculpture in which the trunk of a fir tree has been carved out following one of its growth rings, thus bringing to the surface the past of the tree and its transformations in time. A bronze mold has been cast in the wood, apparently freezing nature’s flow of life. Like many of Penone’s artworks, Matrice reveals the artist’s interest in the relationship between time and nature and, metaphorically, between nature, humankind and transience. In addition, a new major sculpture in stainless steel and bronze, over 20 meters tall, Abete (Fir Tree, 2013), is installed in front of Palazzo della Civiltà Italiana, adding a new natural dimension to the abstract geometric architecture of the EUR area. END_OF_DOCUMENT_TOKEN_TO_BE_REPLACED 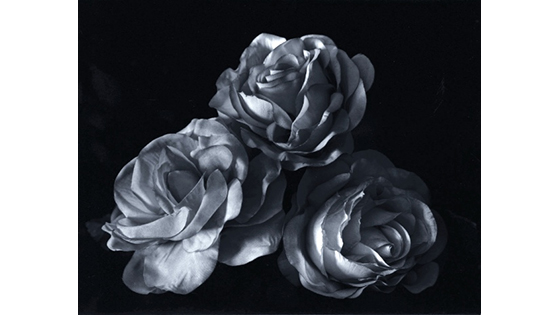 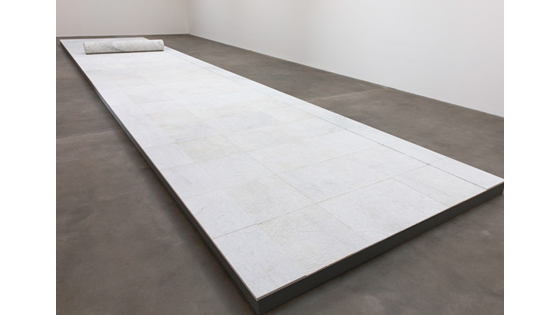 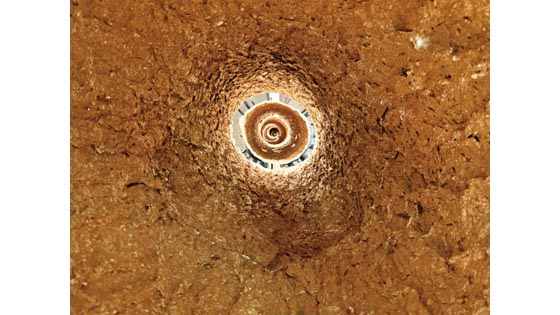 …There is a place on the border between France and Italy, the Valley of Miracles (Valle delle Meraviglie), where there are circa 30,000 rock carvings around Mount Bego, a sacred mountain.

The miracle is not the carvings, but the beauty of the site with its valleys, its mountains, its larches, and the presence of the sea evoked by the smell of the grass.

It is a beauty that suggests a sense of sacredness.

It is a protected area, a natural park in which the vegetation and the territory are periodically maintained. I know woodsmen who work in the park under the supervision of forest rangers, and I go to them when I need larches. The altitude tapers the form of these larches. Large at the base, their trunk narrows rapidly, accentuating its conical shape. I used one of these trees for Space of light. I coated the trunk and the branches with a layer of wax, as if it were a year’s growth in the tree’s life cycle. When it came into contact with the trunk, the wax was imprinted with the pattern of the bark and the signs of the hands that applied it.

I cast it in bronze in eight sections of circa 170 centimeters, obtaining a covering with handprints on the external surface and the negative trace of the tree bark on the inside.

The surface on the inside was covered in gold. The eight sections of the sculpture are lined up horizontally one after another at a distance of about 50 centimeters.

Looking at the interior, one’s gaze follows the absent core of the tree and the light reflected off the gold emphasizes the space, a space of light that testifies to the absence of the tree, a being whose form and existence are defined by the search and the exposure to the light.

Space of light extends for twenty meters towards the line of the horizon, imprisons the light and the gaze in its interior, directing them towards the central focal point of the vista.

The gaze is closed into the interior of the bronze, a year of bronze…

The Nasher Sculpture Center, Dallas will present a major solo exhibition of Penone’s work from September 19, 2015 to February 10, 2016.

For further inquiries please contact the gallery at +39.06.4208.6498 or at roma@gagosian.com. All images are subject to copyright. Gallery approval must be granted prior to reproduction.